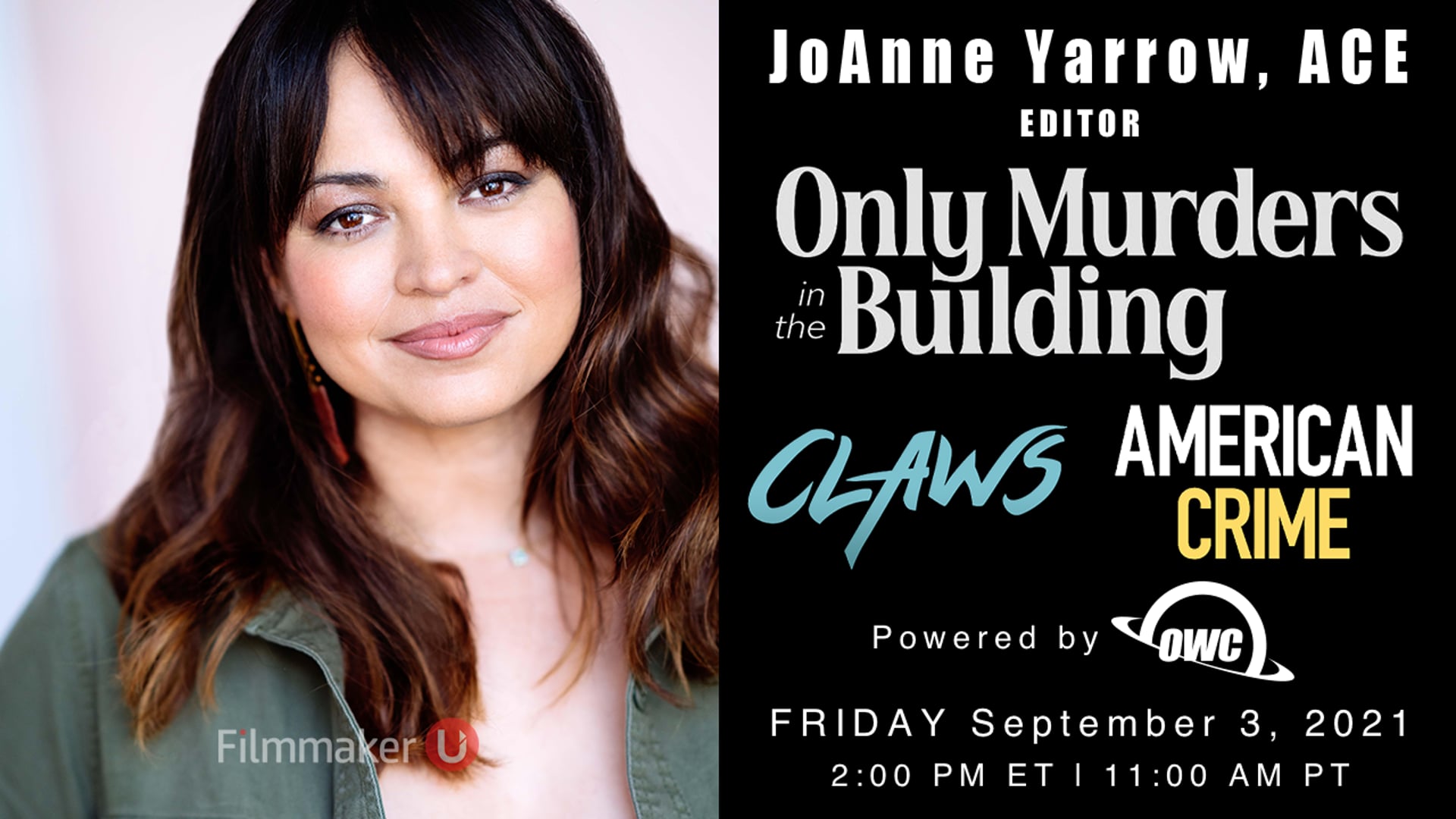 JoAnne Yarrow, ACE, is a Film and Television Editor based in Los Angeles with almost twenty years of experience working for some of Hollywood’s biggest movies and television shows. Her career began as an assistant editor on hits such as G.I. Joe: The Rise of Cobra, Snow White and The Huntsman, and Rise of the Planet of the Apes. She made the leap to editor under the mentorship of Academy Award-winning writer/director John Ridley, for the series American Crime (ABC). During its three-season run, American Crime was nominated for seventeen Emmys and five Golden Globes. JoAnne went on to work on the highly acclaimed OWN series Queen Sugar, and audience favorite, Claws (TNT). JoAnne was nominated for an HPA Award for her work on Vida (STARZ), helmed by Tanya Saracho. She recently completed the first season of much-anticipated Only Murders in the Building (Hulu) starring Steve Martin, Martin Short, and Selena Gomez. JoAnne is currently working on Five Days at Memorial, produced and directed by John Ridley and Carlton Cuse. The limited series will detail five harrowing days in a New Orleans hospital after hurricane Katrina hit. JoAnne is a member of American Cinema Editors and the Television Academy.

This year OWC celebrates their 30th anniversary serving the Apple community with the best upgrades, gear, and accessories. OWC cannot thank their customers enough for the opportunity to serve, dream big, and for allowing them to do what the love so much each and every day. OWC can’t wait to showcase everything they have planned for the next few years, and they’re excited by the boundless opportunities the next 30 years will bring.
Always focused onward and upward with dedication to innovation, quality, and trust, they always strive to go further to deliver a better return on our customers’ technology investments. OWC’s customers rely on them to provide dependable products and support, without hesitation or compromise. They’re committed to providing free, comprehensive educational content and the support necessary to ensure that the MacSales.com customer experience is second to none.

Before the age of digital, mentorship played a key role in film crews, post rooms, and a filmmaker’s career development. Places like the cutting room were hubs for passing on techniques, ideas, war stories, teamwork, and developing relationships that would help you evolve your career. You would move from trainee to assistant, and eventually, the day would come where you became a full-fledged Cinematographer, Editor, Colorist, VFX Artist or any other position in the film industry.

Pros who had worked years and were coming close to the end of their career, delighted in sharing their knowledge and ideas that they had learned over the decades. However, in the digital era, young film professionals are thrust into positions without having the chance to learn from those at the top of their game.

Filmmaker U was created to help fill this void in the modern-day film industry. This online education series brings the best in the business from behind the camera, to any aspiring artist anywhere in the world who can no longer obtain this type of apprenticeship.
Go to www.filmmakeru.com for more information on all of our courses.
—
#FilmmakerU #FilmU #FilmUChats #Editing #OWC #PoweredByOWC #JoAnneYarrow #OnlyMurdersInTheBuilding #AmericanCinemaEditors #ACE #Editor #Edit #CuttingComedy #PostProduction

The Only Difference Between Martyrdom and Suicide Is Press Coverage

Oct 28, 2021
We use cookies on our website to give you the most relevant experience by remembering your preferences and repeat visits. By clicking “Accept All”, you consent to the use of ALL the cookies. However, you may visit "Cookie Settings" to provide a controlled consent.
Cookie SettingsAccept All
Manage consent