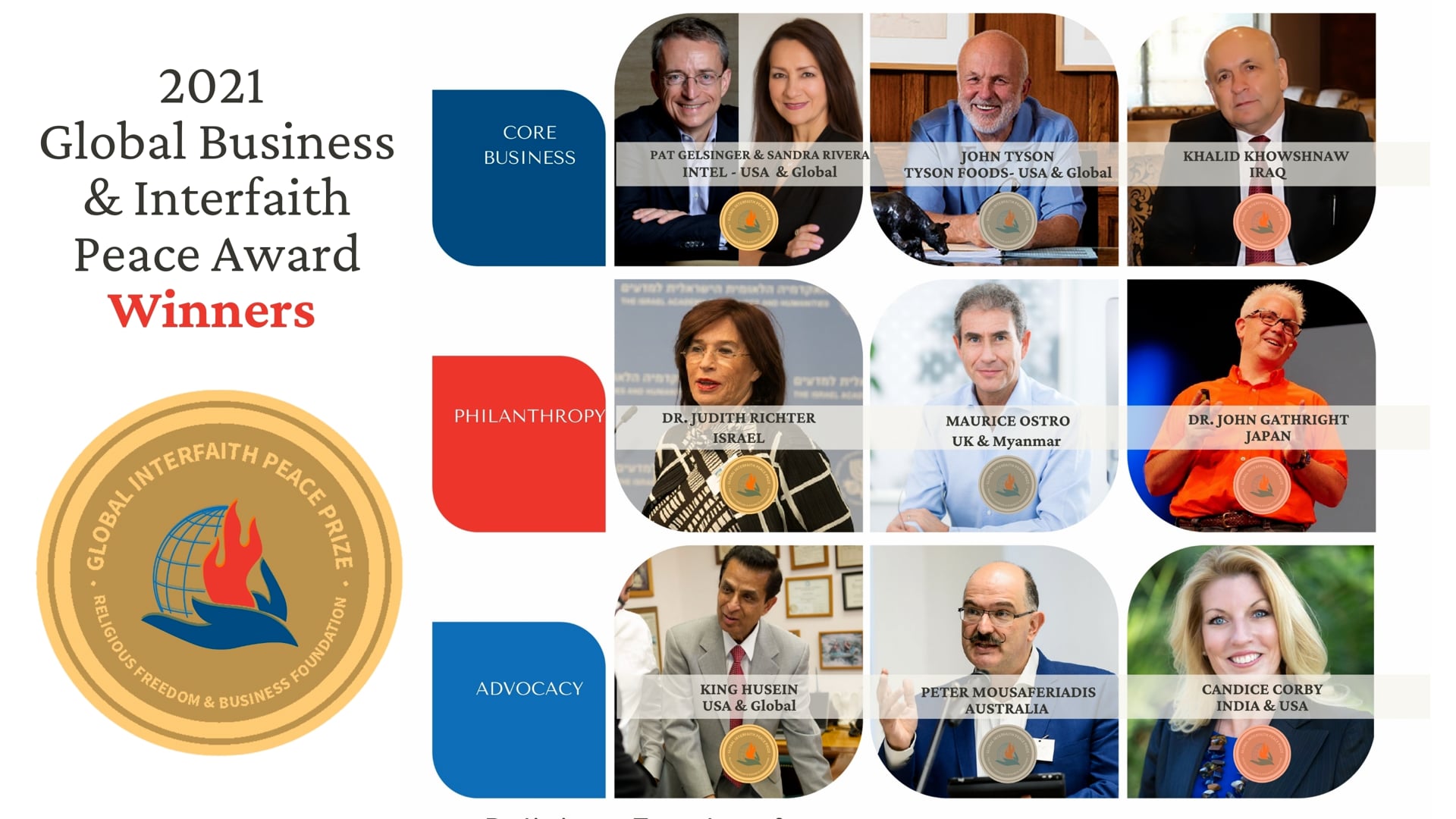 Washington DC and Tokyo, 24 August 2021: Ten business men and women from around the world took the stage, spoke and were honored virtually at the global Dare to Overcome conference on August 24 for their work in interfaith understanding, religious freedom and peace. All of the leaders are recognized for using their businesses to bridge cultural and religious divides.

Winners of the third biannual Global Business & Interfaith Peace Awards expressed their thoughts on faith and work as they were presented with Gold, Silver, and Bronze medals in a virtual global ceremony at 12:00 noon US Eastern Time, Tuesday, Aug. 24, the day of the Opening Ceremony of the Paralympic Games in Tokyo. For winners in Japan, a special awards ceremony was held at the prestigious Sophia University in Tokyo on Aug. 22.

The awards are presented by the Religious Freedom & Business Foundation, a US-based nonprofit, in cooperation with the United Nations Global Compact’s Business for Peace initiative. The foundation helps educate the global business community about how religious freedom is good for business and how they can promote respect for freedom of religion or belief.

Winners come from a variety of religious backgrounds and manage companies and multi-national enterprises based in Australia, India, Iraq, Israel, Japan, the United Kingdom, and the United States.

Gold, Silver, and Bronze medals are given in three categories: Core Business, Philanthropy, and Advocacy.

The Core Business gold medal is shared by Pat Gelsinger, Intel’s CEO, and Sandra Rivera, Intel Executive Vice President, former Chief People Officer and now General Manager of the Datacenter & Artificial Intelligence Group, who have helped create a culture where people can bring their whole selves to work – faith and all – thanks to solidly incorporating religious diversity into their overall diversity & inclusion commitments.

The Philanthropy gold medal goes to Dr. Judith Richter, CEO of the Israeli heart stent company Medinol, who also founded the NIR School of the Heart to help high school students not only understand cardio-vascular career opportunities but also connect the hearts of people from different cultural, ethnic, and religious backgrounds.

The Advocacy gold medal goes to King Husein, Chairman and CEO of Span Construction & Engineering, who has played a critical role addressing the rising tide of restrictions on religious freedom that has swept the globe over the past decade. His efforts range from helping found the South Asian Consortium for Religion and Law Studies, to helping to kick off the first-ever Business Roundtable to advance International Religious Freedom during the 2019 UN General Assembly in New York City.

Silver medals go to John Tyson (Core Business), Chairman of Tyson Foods, who was an early pioneer of building a faith-friendly workplace by recognizing the spiritual and psychological needs of all employees; Maurice Ostro (Philanthropy), Chair of Ostro Fayre Share Foundation, Vice Chair of the Council of Christians and Jews (the UK’s oldest interfaith organization) and the Founding Patron of the Faiths Forum for London; and Peter Mousaferiadis (Advocacy), founder of Cultural Infusion in Australia, who is a pioneer in using cultural and artistic expression as a means of promoting social cohesion and interfaith understanding.

And the three bronze medals go to Khalid Khowshnaw (Core Business), founder the Hemn Construction Group in Iraqi Kurdistan, who combats discrimination based on race, religion, ethnicity, or sectarian identity by intentionally hiring differing nationalities to work alongside one another; Dr. John Gathright (Philanthropy), founder of Tree Climbing Japan, who helps children of differing faiths, abilities, and challenges come together to find an increased self-confidence through embracing the challenge of climbing trees; and Candice Corby (Advocacy), founder of Cobra Legal Solutions in India and the U.S., who promotes the celebration of religion and belief, encouraging employees to be their full selves, including bringing their faith and beliefs to work in this majority-female law firm.

“These CEOs show that business is a powerful force for building interfaith understanding, religious freedom and peace in workplaces, marketplaces and in societies at large,” said Brian Grim, president of the Religious Freedom & Business Foundation and global chair of Dare to Overcome. “Indeed,” Grim said, “civil society and governments have much to learn about building religious freedom in practice from these amazing champions.”
0

Sep 19, 2021
We use cookies on our website to give you the most relevant experience by remembering your preferences and repeat visits. By clicking “Accept All”, you consent to the use of ALL the cookies. However, you may visit "Cookie Settings" to provide a controlled consent.
Cookie SettingsAccept All
Manage consent